Buy 1 Room, Get Floors for All Other Rooms for $50 in Each! Product Only. Select Styles. DETAILS 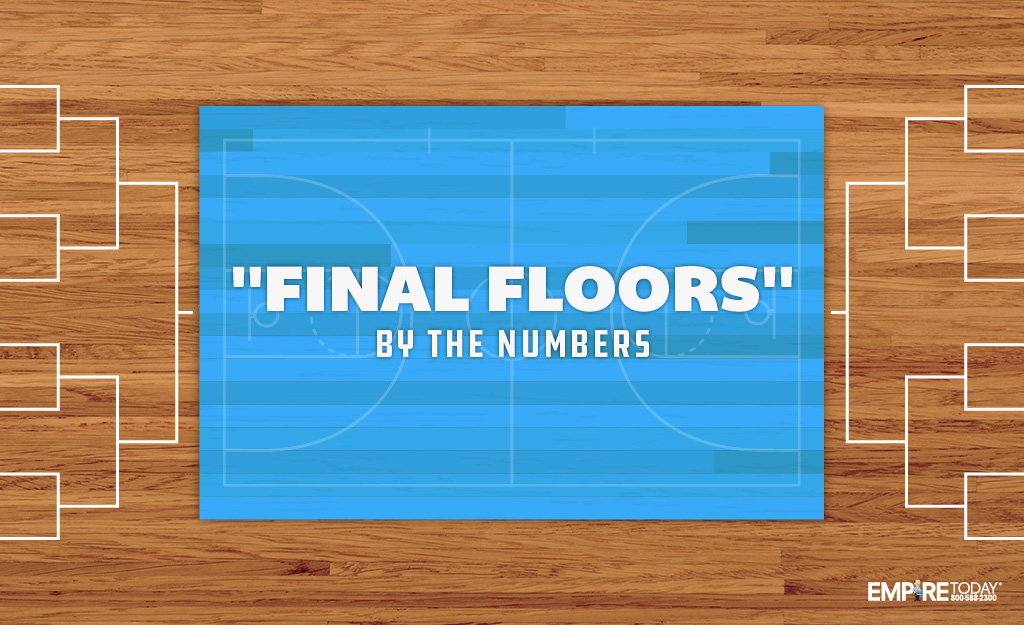 The Final Four Floors by the Numbers

March Madness is virtually a month-long holiday for many Americans. Each year, college basketball teams fight their hardest to make it to the championship. Meanwhile, fans make their best predictions by putting together brackets (hoping to avoid the frustration of it later getting busted). At the end of it all, one team is left as the true winner on a court made just for that occasion. With this in mind, we at Empire Today decided to take a closer look at the “Final Floors” and game outcomes over the past 2 decades. We analyzed the details of the court made specifically for both the “Final Four” and the championship game, and the results gave us an interesting picture of the history.

The History and Design of the Floors

Our research revealed that Connor Sports has been the Official Court Supplier for the NCAA Men’s Basketball Championship since 2005. This company is responsible for the entire process of creating and installing the “Final Floor” for every “Final Four” and championship game. Each year, the maple hardwood for the court is sourced in Two Hearted River Forest Preserve MI, then sent to Amasa MI to be milled, then sent to Idaho Falls ID to be finished, and then finally sent to the stadium to be installed. Once at the stadium, the floors take approximately 5 hours to assemble and install. We decided to look more closely at the length of travel for the floor each year based on the game location. We found that, from sourcing to installation, the court has travelled most in total for the games located in Atlanta GA (2552.01 mi.) compared to any other championship game location. Following this city in the rank are New Orleans LA (2464.29 mi.) and Detroit MI (2408.05 mi.). 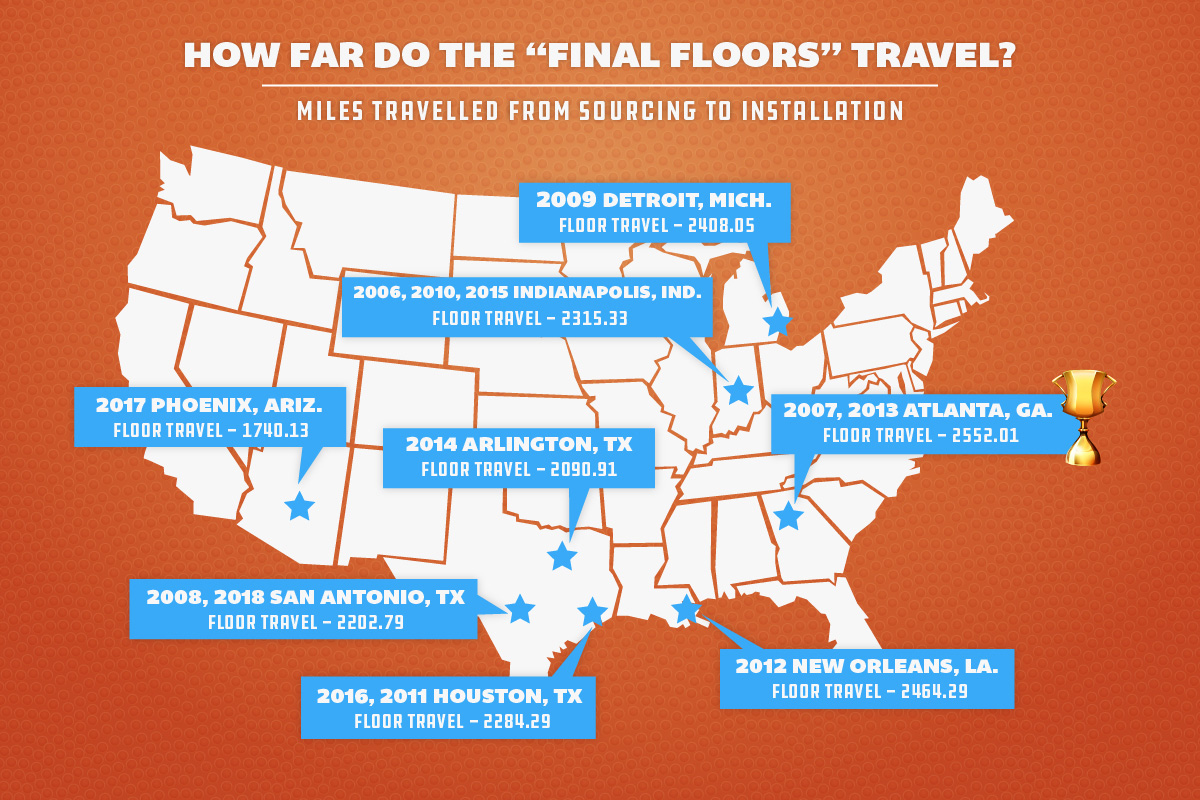 We also wanted to take a look at how the floors are designed each year since basketball courts are known for their sometimes unique patterns. We found that the “Final Four” court design included blue as the main color more commonly than any other. In fact, 57% of the games over the past two decades featured it. Green and red are tied for second at only 14% of games each.

Additionally, we looked closely at the logo design for each year. These often include a reference to the city in which the game is hosted, but we wanted to see how common this truly is. We found that of the past 20 games, only 5 didn’t include nods to the host city in the court logo design. Of these 5, 3 were for games in Indianapolis. 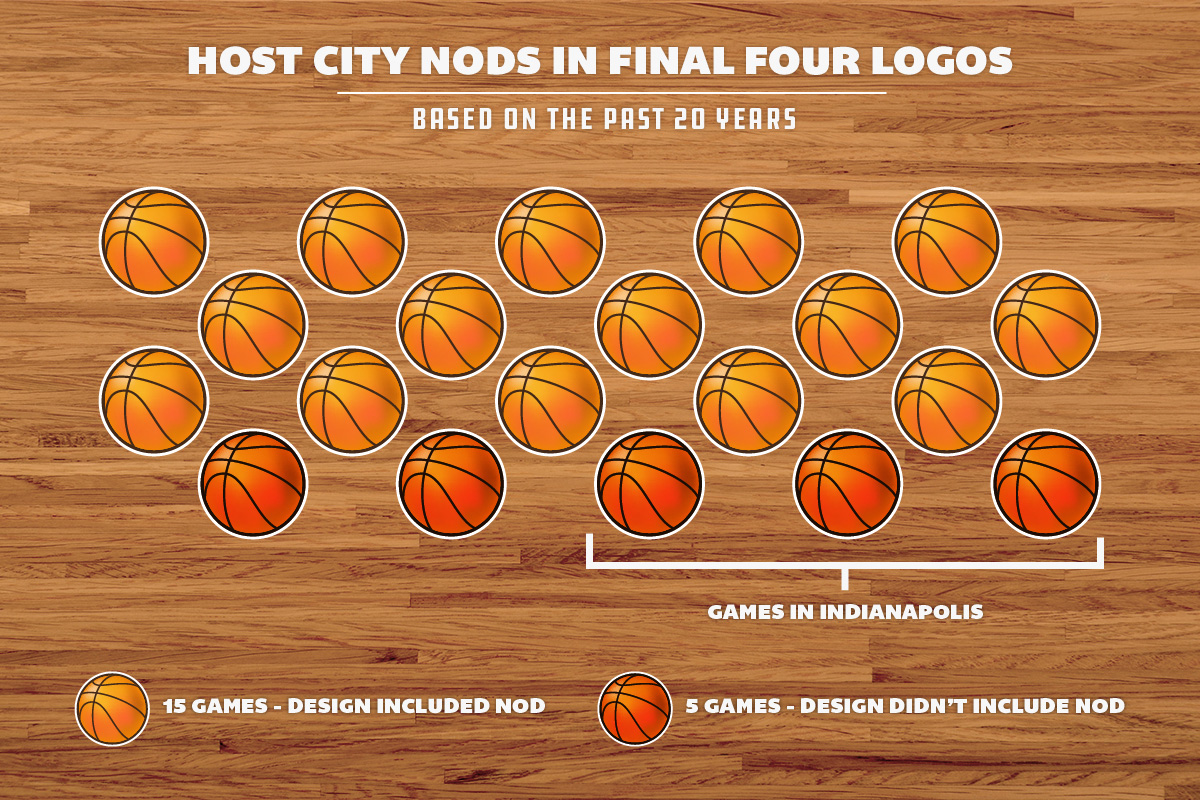 We also researched what happens to these specially-made courts after the championship game since they don’t stay in the host stadium by default. In fact, it’s first offered to the winning basketball team to purchase before being available to anyone else. Often, a team will purchase the court and display the logo or repurpose it for charity. In fact, we found that pieces of the court have been sold as fan memorabilia after 60% of games over the past 2 decades, typically to raise money for a cause. 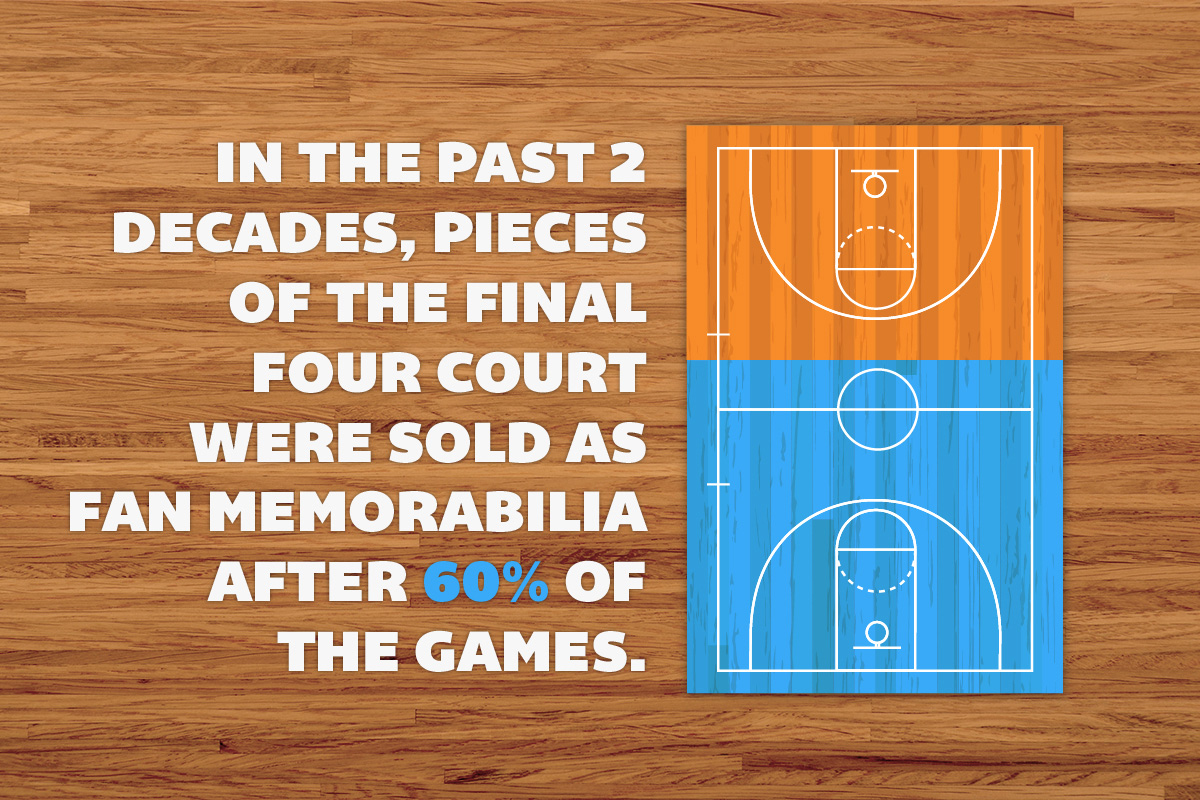 The History of the “Final Four” Location

Beyond the court itself, we decided to take a look at the championship game more generally as well. First, we analyzed the location of the game and found some interesting insights. As it turns out, Indianapolis hosted most often over the past two decades at 4 games. San Antonio and Atlanta are tied for second at 3 games each. 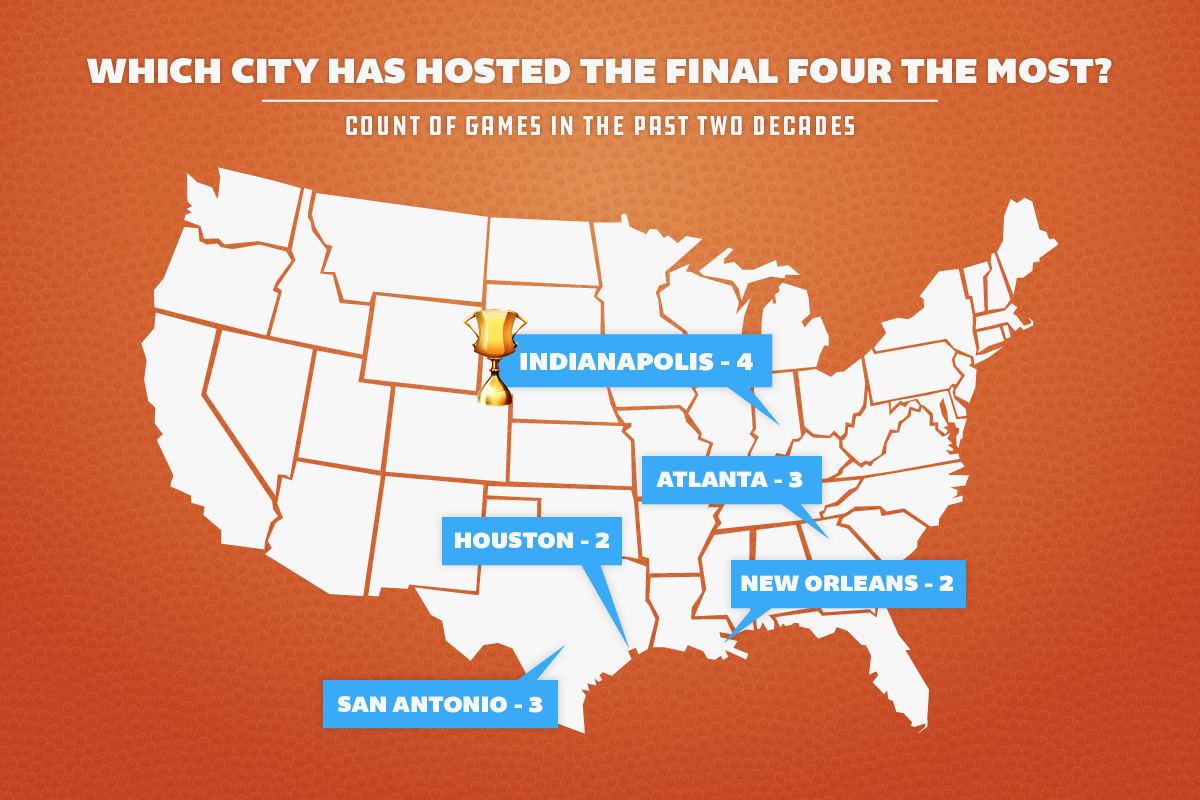 We also analyzed the game hosts by region. Unfortunately for those in the northeast, the championship wasn’t hosted at all in the region during the past two decades. It was most often held in the south (60% of games), followed by the midwest (35%) and west (5%). 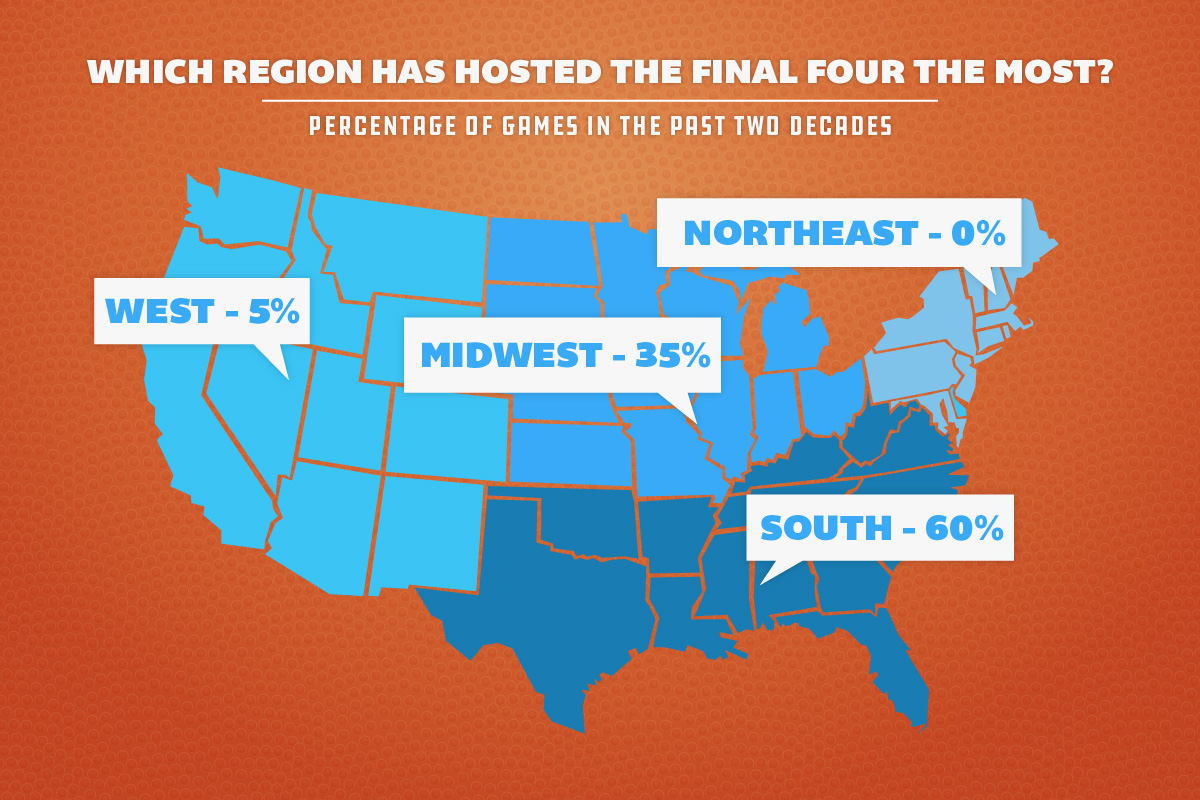 Get Beautiful Floors of Your Own

Let Empire help you make your home a winner with new Carpet, Hardwood, Laminate, Vinyl, or Tile. We make getting beautiful new floors easy. While you prepare your March Madness bracket this year, Empire will bring hundreds of samples right to your home. Here’s how to shop for flooring the easy way.

Wondering how new floors will look in your home? Try on floors in your exact room.

Buy One Room, Get Carpet, Hardwood, Vinyl or Laminate for All Other Rooms for $50* In Each When You Pay for Installation, Padding And Materials!

*Purchase highest value room at regular price, and get select styles of carpet, hardwood, vinyl and laminate for all other rooms of equal or lesser value for $50 each when you pay for installation, padding, and materials. Promotion does not apply to stairs, miscellaneous charges, and prior purchases. Product may not be sold separate from installation. Residential installations only, and at the same address. Not available in all areas. Valid 04/11/2022 through 05/29/2022. Subject to change.